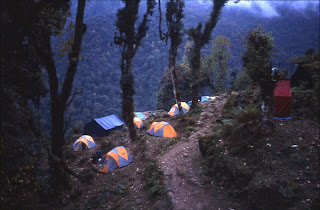 At 0545 I was wakened with bed tea. It was very frosty outside.

At 0630 hours we had breakfast, which consisted of porridge, pancakes and marmalade and at 0700 hours we left the campsite and descended to the trekkers’ hut beside the Prek Chu. Thereafter we took the lower path, which undulated along the mountainside. The sun came out at the Prek Chu but only lasted an hour or so before the cloud rolled in.

At 1045 hours we arrived at the lunch spot having not gained nor lost any height. It was now cold and misty. Lunch consisted of chapatis, fish, pasta mix with some vegetables.

At 1200 hours we set off steeply downhill for approximately 1000 metres passing through a Tibetan village with its grocery shop and restaurant. This was the first habitation we had seen since the trek started.

At 1345 hours we arrived at the campsite. This was the lowest altitude we had been at for a couple of weeks. It was noticeably milder here. The campsite was located on a terraced area with very little space to move about. The tents were up but the yaks had not arrived with the bags. There were spots of drizzle.

At 1400 hours we had tea and biscuits and thereafter sorted out my tent and read.

At 1800 hours we had dinner of roast potatoes, rice, pizza, soup, and fruit salad. At 1940 hours I retired to my tent and read. Lights out at 2015 hours. I slept well till 0040 hours, when awake for some time, so read before falling back to sleep.