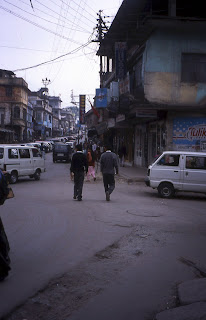 At 0500 hours woke and read until 0615 hours when I had another shower and packed. I walked round the hotel garden and grounds. At 0715 hours we had breakfast, which consisted of porridge, fried eggs, toast and marmalade.

At 0800 hours we left the Hotel Tashi Gang in Jeeps. I was accompanied by Cameron, Gina and Ian. We stopped in Jorethang for a short time so that some of the trekkers could get duty free and cheap medicines at a chemist.

At 1230 hours we crossed the border from Sikkim into West Bengal at Melli where my passport was stamped once again. Here we had lunch, fried noodles, (a bit spicy for me) bhajis (bit dry) and a Fanta for 30 rupees, about fifty pence.

At 1300 hours we left this border town and headed down the side of the Tista River before climbing steeply up to Kalimpong. At the turn off point we saw lots of monkeys. At 1340 hours we arrived at the Himalayan Hotel, which was a rather splendid building. Here we had tea and cakes on the patio before being allocated our rooms. Again I was sharing with Ian.

I later walked through the town, although it is not really a tourist area, before returning to the Hotel and had tea and cream crackers in garden. (No cakes left – what a pity.) I sat in the garden and wrote up my notebook and read. I later sat in the lounge area with others from my group.

At 1940 hours we had dinner, which consisted of soup, Indian style main courses, lemon sorbet and coffee. It wasn’t a great meal for the type of hotel but apparently it was closing down the following day, as the Americans weren’t visiting the area.

At 2200 hours I retired to bed with lights out at 2215 hours and had a reasonable night’s sleep.