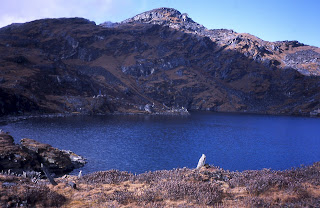 At 0540 hours bed tea arrived. It was a clear and cold morning as I packed and at 0630 hours had breakfast which consisted of porridge, toast and marmalade.

At 0730 hours we left the campsite and steadily climbed up the west side of the ridge towards the three holy lakes arriving at the campsite (4253 metres) at 1140 hours. The tents were already up and we had lunch at 1200 hours.

At 1300 hours, Gina, Maggie and I walked along an undulating path to one of the holy lakes about ninety minutes walk from the campsite. I continued to a viewpoint another ten minutes further on but the cloud came down and there was no view. I returned to the lake, joined Gina and Maggie and we returned to the campsite around 1545 hours.

At 1600 hours we had afternoon tea and biscuits in the mess tent and while seated there saw a brocken spectre. The sun set over Makalu and Everest.

Ascent for day was 550 metres with a descent of 245 metres. Maximum altitude 4253 metres. This however did not include the afternoon’s stroll.