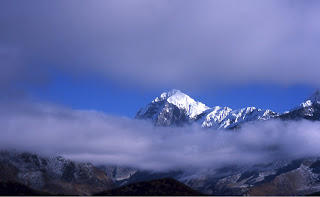 At 0600 hours I awoke and had the usual bed tea as the sun was rising. Another trekking group was camped below us. This was the first group we had seen since we started the trek. Someone said they were Swiss.

At 0700 hours we had breakfast which consisted of porridge and crepes and marmalade. Alan and Lesley were giving up as Alan had a sore back. They will be to be escorted by a Sherpa down to Yocsam where they will await our arrival in a few days time.

At 0740 hours we set off on the day’s trek across undulations and a steep descent to a trekkers’ hut beside the Prek Chu, a glacier stream. On the descent we had to give way to a group of yaks coming uphill. At the trekkers’ hut Cameron, Gina and Rex met another guide they knew so we took a short break.

We crossed the Prek Chu and climbed up to Tangshing arriving there at 1100 hours. This was the campsite for tonight. At 1210 hours we had lunch, which consisted of soup, potato scones, fried spam and mandarin segments.

At 1320 hours I sorted out my tent, wrote up notebook, read and slept. At 1600 hours, afternoon tea and biscuits and at 1800 hours dinner of soup, pasta, sausage and peas and some kind of potato, apple custard and jelly.

Ascent for day was 435 metres with a descent of 515 metres. Maximum altitude was 4040metres.