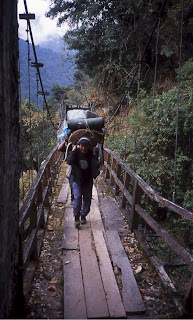 At 0440 hours I was wakened by kitchen staff using burners to heat water and make breakfast. This was the first and only time I had this problem as the tents and mess area were so close together. I therefore read until 0540 hours when I had bed tea, washed and shaved as usual and packed.

At 0630 hours we had breakfast, which consisted of porridge, orange pancake and marmalade. At 0700 hours we left the campsite heading for Yoksam through undulating jungle type forest and across suspension bridges. It was a reasonable walk.

At 1050 hours we arrived at Yoksam, which was the first real civilisation we had encountered since starting off on the trek. Yoksam was as far as vehicles could go on an untarred road. We walked through the village to the Hotel Tashi Gang where we booked in. I was sharing a room with Ian. We met up with Alan and Lesley who had been staying there since they came down from the mountains. We had hot juice and a shower, the first for a couple of weeks.

At 1200 hours we had lunch which consisted of chips and tomato and onion sandwiches, beans and fruit. The meals here were still to be prepared by the hired kitchen staff, as the Hotel was not equipped to cater for such a large party.

At 1400 hours we had a walk through the village. It started to rain so I returned to hotel.

At 1600 hours I had tea and biscuits then read. At 1900 hours dinner, which consisted of soup, rice mix, very small piece of chicken, beans, custard and cake. After dinner we said farewell to the kitchen staff, porters, yak men and sherpas. They all received a tip and a bottle of beer. All were very happy and appreciative.

At 2100 hours I retired to bed and read with lights out at 2145 hours. Slept in sleeping bag on my thermarest as bed hard and sheets not very clean. Slept well till 0040 hours then broken sleep till 0430 hours.