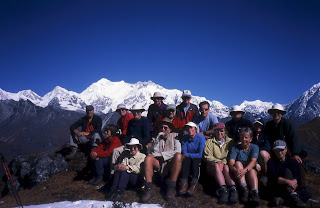 Group
At 0520 hours I rose and packed before bed tea arrived at 0540 hours. At 0550 hours watched sunrise on Makalu. Breakfast was at 0630 hours, which consisted of porridge, pancakes and marmalade.

At 0710 hours we set off from the campsite and passed other holy lakes and standing stones to reach a col. At a second col there were magnificent views of the Himalayas. From the left Makalu, Everest, Janu, the five peaks of Kanchenjunga and Tent peak. To the right was Panchu, Japuno and Siniolchu.

After about an hour taking in this panorama we descended, steeply at times, over snow and ice covered paths to Gamothang where we had lunch at 1200 hours. It consisted of Tibetan bread, sliced potatoes with onion and fried spam.

At 1300 hours we set off again and climbed steeply before dropping down into the next valley arriving there at 1430 hours. The tents were already pitched and this was the campsite for the next two nights. (3953 metres). The sun was just leaving the valley as we arrived and it was turning colder.

I sorted out my gear and did some washing and wrote up my notebook before afternoon tea and biscuits at 1600 hours, then read till dinner.