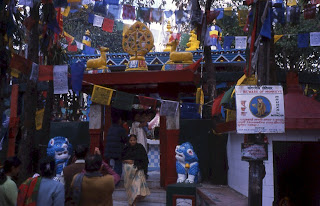 Breakfast was around 0900 hours and afterwards I went with Drew and Gill, to visit a Hindu Temple on Observatory Hill. We walked round the hill and down to the Padmaja Naidu Himalayan Zoological Park where we saw red pandas, a snow leopard, a Tibetan wolf and a Himalayan black bear. We met kids from Nepal who wanted photos but I managed to avoid this and but they got there photos with Gill, which delighted them.

We also visited the Himalayan Mountaineering Institute, which was very interesting as Sherpa Tenson, who came from Darjeeling, was prominent in the exhibitions. We also visited his statue and where he was cremated.

After a four course lunch with tea I went shopping and bought a picture, some postcards and presents before returning to the Hotel where I had tea and cake and wrote my postcards.

About 1845 hours the remainder of the group arrived in Darjeeling and we heard the reasons for their delayed flight. One woman, Stephen’s wife, decided not to travel after the problems at take off, and had returned home. The trekking group now consisted of sixteen plus Rex, the trek leader.

Dinner was at 2000 hours and at 2300 hours we retired to bed. I placed my thermarest on top of the mattress which made the bed more comfortable.