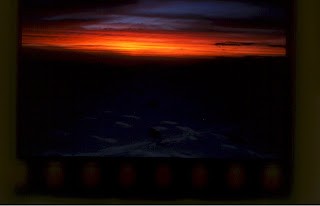 Sunset
At 0530 hours I was wakened with bed tea. It was very cold and frosty as the campsite was in a hollow which made it even colder. It was also windy. At 0550 hours I climbed onto a small hillock and watched the sunrise. Thereafter I packed my gear and at 0630 hours had breakfast which consisted of porridge, pancakes and marmalade.

At 0710 hours we set off along an undulating ridge in sun but there was a cold wind blowing. However it got warmer as the day went on. The undulating path was snow covered in places and we now had views of the mountains in Butan and of Chamlaharry.

At 1240 hours we arrived at our snow covered campsite at 3932 metres. It was sunny but getting colder with slight wind. Once everyone had arrived at camp we had lunch which consisted of cheese and onion sandwiches. In afternoon I washed and cleaned some of my clothes, my first change of clothes on the trek. However my washing froze during the afternoon. I also did some reading and we were given afternoon tea and biscuits.

At 1800 hours we had dinner and retired to my tent at 2000 hours and read before lights out at 2100 hours. Cold frosty evening and night.

Ascent for day was 640 metres with 455 metres of descent. Maximum altitude 3932 metres.